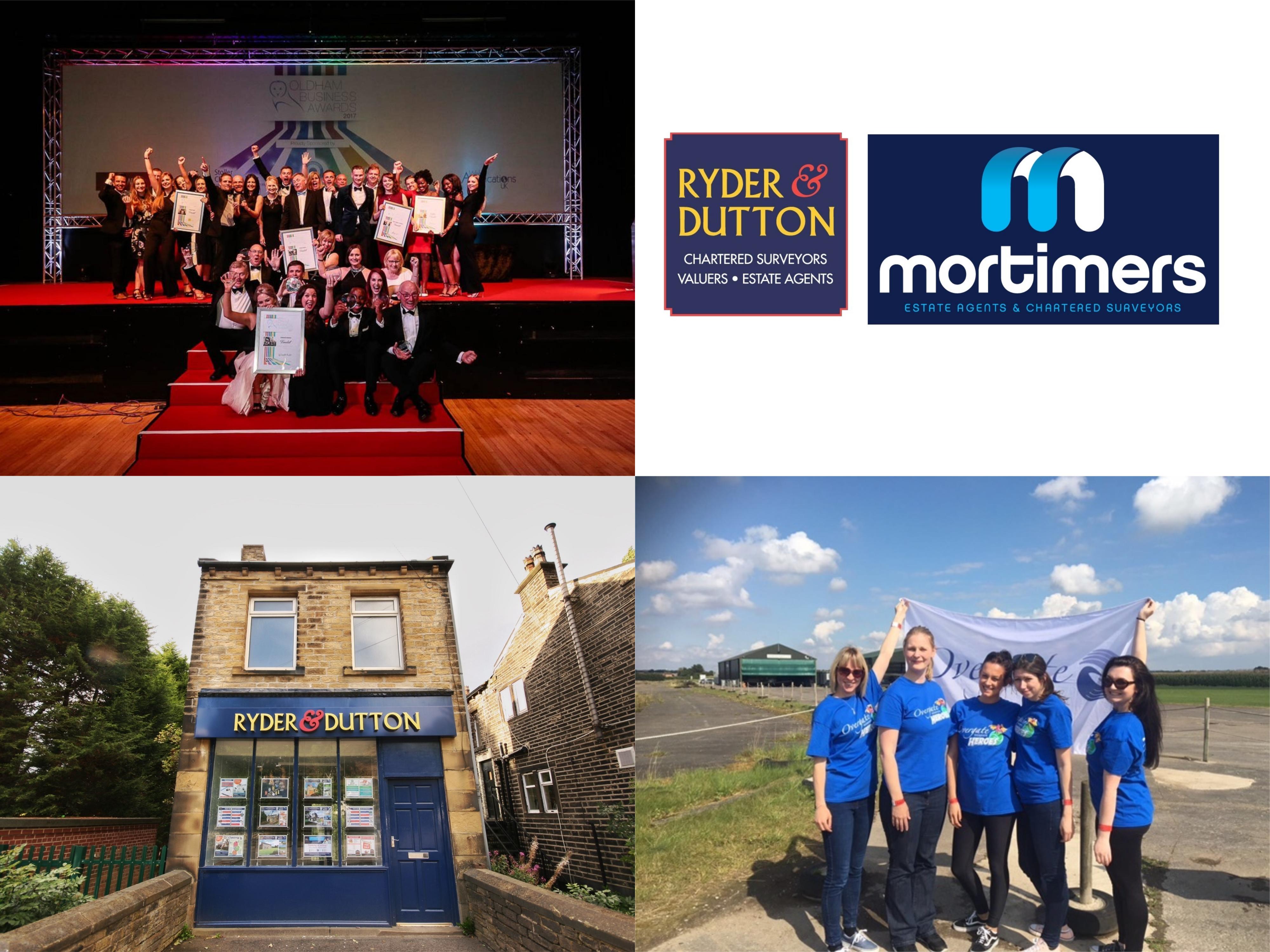 Ryder & Dutton have enjoyed a successful 2017 which has seen us open a new branch in Colne Valley, be crowned Employer of the Year at the Oldham Business Awards and acquire Mortimers Estate Agents. We would also like to share some of the news and highlights from the property world in 2017.

In March of this year, article 50 was triggered by Prime Minister Theresa May, meaning that we will be leaving the European Union sooner rather than later. There was concern expressed by some about how this would impact the housing market and property in the UK in general. However, for the large majority of the country, Brexit will have little to no impact on house prices.

A recent study showed that in the majority of the UK, homebuyers are moving because they need to due to jobs or expanding families, meaning that house prices will hold up in the large majority of areas around the UK. With Brexit negotiations so far proving successful, economic growth continues to remain very positive and confidence was boosted throughout the year, after some initial fears.

We were truly delighted to have won recognition at the Oldham Business Awards, especially in such a rewarding category as this one, which recognises employer’s commitment to staff development and opportunity.

In August, it was with great delight we announced that Ryder & Dutton acquired the business of Mortimers estate agents. Whilst being integrated technologically with ourselves, Mortimers have continued to trade under the same brand name it has established for itself within the area.

Mortimers is a long established and well respected Lancashire agency, with a number of offices located in Blackburn, Great Harwood, Accrington, Clitheroe and Whalley, along with a Fine and Country property office covering the Ribble Valley area. This acquirement meant that Ryder & Dutton are now one of the largest estate agents in the North, with a 26 office network, covering such areas as Greater Manchester, Lancashire, North Derbyshire and West Yorkshire.

Our very own Richard Powell, director at Ryder & Dutton said at the time of purchase: "This is a very exciting opportunity for the directors and staff to create a business well placed to deal with the challenges of estate agency in the 21st Century. It brings together technology and new communication methods with traditional local knowledge and customer care, professionalism and high ethical values to provide a service suitable for properties and all people."

In October, we once again added to our extensive branch network, opening a brand new office in the Colne Valley area! The new office is located at 828 Manchester Road, Linthwaite. The branch is headed up by Manager Leanne Randall who has 15 years of management experience in retail banking, mortgages and estate agency. She has also been joined by Senior Negotiator Emma Shepherdson, who has been negotiating sales across West Yorkshire for the last few years and has a genuine passion for property after being brought up in a family that build and develop new homes for a living.

At the time of opening, we asked Leanne about the plans for the new branch in Colne Valley, she said “Having lived in the Colne Valley since birth, I have fantastic knowledge of the local area and a genuine admiration for the place. My aim is to provide an efficient and personalised service to the Colne Valley community, promoting the area we live in and all the fantastic things about it!”

The addition of the new Colne Valley office further enhanced our customer experience for those buying, selling, or letting in HD7 and means we offer an unrivalled coverage across Huddersfield and the surrounds alongside our Holmfirth, Huddersfield, Lindley and Skelmanthorpe offices!

The annual Chancellors budget took place in November this year and there were as always plenty of talking points. Mr Hammond’s budget covered such topics as taxation, wages, alcohol/tobacco, public finances, pensions, education, transport and much more. One of the main points of topic from the 2017 budget was property and housing, focusing on extending the help to buy scheme (which is fantastic news for people looking to buy a new home) and also there was the pledge to build 300,000 new homes a year by the year 2025.

Along side this, the main focus and talking point coming out of the budget was all about Stamp Duty. Stamp Duty will be totally abolished for all first time buyers on purchases up to £300,000, which is estimated that 95% of all first time buyers will benefit from this. Stamp Duty relief will also be available for any first time buyers looking at more expensive properties, so relief will be available on the first £300,000  for any property purchases up to the cost of £500,000, with the remaining £200,000 incurring 5%. This change/reduction applied immediately in England from the time the budget was announced.

At Ryder & Dutton we are a strong supporter of charity and are delighted to offer support to a number of local charities throughout our region, including Overgate Hospice, Dr Kershaw’s Hospice, Kirkwood Hospice, Springhill Hospice and Willow Wood Hospice. 2017 saw us partake in a number of events.

This Summer we decided to do something a little different to raise money for Overgate Hospice. 5 members of our West Yorkshire based branches took to the skies, taking part in the 15K Experience Tandem Skydive, the highest skydive in the UK, in order to raise money for this fantastic cause. We set a massive target for this event, looking to raise a total of £1750 and we were delighted to announce that we smashed our target, with the team raising an incredible £2,084.83 for the hospice!!

We also had a team of staff getting very messy in the name of charity, who took part the annual Colour Blast park run for Dr Kershaw’s hospice, where runners are blasted with paint around almost every corner on the route! It was great fun for all taking part and more importantly we managed to raise a great amount for Dr Kershaws Hospice.

In December, took part in a company wide ‘Winter Wooley’ day in aid of Kirkwood hospice, where all our staff members wore their favourite Christmas jumper for the day for a small donation of £1. These days are always good fun and we had some great feedback and interaction from all of you on social media, showcasing some of our staff members best efforts! We also intended to take part in the annual Santa Dash for Springhill Hospice where entrants dress up in their Santa suits provided and proceed to run/walk the course based around Hollingworth lake, however this event had to be postponed due to bad weather.

We want to thank you all for your fantastic support with these causes, if you took part in an event, donated for one of our staff members efforts or if you even just simply shared awareness on social media, its all hugely appreciated on our behalf, but mainly that of the brilliant causes we support! We already have a number of events in the works for the great charities for 2018 and we cant wait to share them all with you next year!

2017 has been a year with great variation in the property market dependent on location and there are significant variations in price trends at regional level. For once London returns the most negative sentiment with downward pressure on prices in the South East but elsewhere we are pleased to say there has been further price growth and in particular solid gains have been reported in our areas.

At Ryder & Dutton the total number of sales have been similar to 2016 which in view of the uncertainty in the economic climate we have been pleased to see. Due to a shortage of new properties to the market prices have risen significantly in some areas and on average we have achieved 98% of the asking or guide prices for the properties we have sold. This is testament to our unrivalled knowledge in all our operating areas and the amount  of motivated quality applicants who connect with us.

It is hoped that the stamp duty changes announced by the Chancellor on the autumn statement will stimulate the market at first time buyer prices and that this will have a knock on effect on the rest of the market in 2018. The continued shortage of property is likely to cause prices to rise further and at long last to take them well above 2007 levels. The average time taken to achieve a sale has reduced and if you are considering a move now is a good time to seek a valuation so don’t hesitate to contact us.