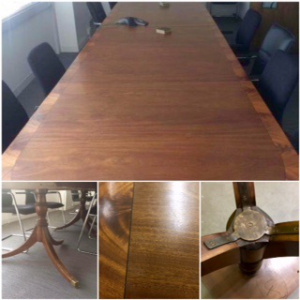 There will be a rare opportunity for someone to acquire a piece of sporting history at our September fine arts antique sale in association with Wright Marshall Ltd.

This stunning boardroom table has been discovered from the former rugby World Cup offices at Twickenham Stadium, Webb Ellis House. After much research, and with the help of World Rugby Head Office in Dublin, it has been found that it is one of the most significant examples of rugby related sporting memorabilia available anywhere in Europe.

Some of the most important decisions in the history of the game were made around this table. Most notably, the decision to go from amateur to professional and, perhaps equally as significant and of more interest, the planning of the first ever Rugby World Cup hosted jointly in Australia and New Zealand in 1987 as were subsequent world cups including the most successful of all, the 2015 Rugby World Cup in England.

“World Rugby attest to the authenticity of this table having formally being located at the East India Club and the head office of World Rugby for the purposes of World Rugby Council and Committee Meetings.

The Board Table would have been used for all World Rugby (formerly the IRB & IRFB) Council & Committee meetings which took place at the East India Club between 1969 and 1996 and then at the World Rugby Offices in Dublin from 1996 through to circa the mid 2000’s.From 2012 to 2016 the Board Table has been located in the Boardroom of Webb Ellis House, London.

During its time at both the East India Club and World Rugby Head offices all members of the IRFB/IRB Council, from 1969-circa mid-2000’s would have sat at the table at one time or another. The issues discussed/debated and historic decisions taken would have included all Council business including but not limited to the Laws of the Game, Regulations Relation to the Game, Amateurism, International tours and tournament and the Awarding of Rugby World Cup Tournaments etc.”

The boardroom table will feature in our September Fine Arts Auction sale and we are fascinated to see where its new home will be.