Our Rawtenstall team complete the 'Relay for Life' 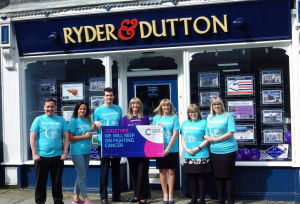 The Ryder & Dutton team in Rawtenstall are proud to have taken part in a 24 hour Relay for Life? event at Marl Pitts Sports Centre in Rossendale, to raise money for Cancer Research.

Starting at 11am on Saturday 18th June, 35 teams took turns at completing laps of the running track over 24 hours, finishing with a closing ceremony at 11am Sunday 19th June 2016.

Jeannette Schofield, part of the Rawtenstall sales team, is living with cancer and battles every day without complaint. She also attended the event with her own team 'Jeannette's Corkers' along with the Ryder and Dutton Rawtenstall sales team named 'Schofield's Strollers' in support of Jeannette. 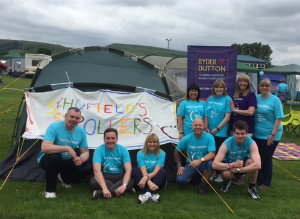 Between the two teams we have raised over £2000 and donations are still coming in!

Team captains Helen Norman and Jeannette Schofield wish to thank everybody for all the kind donations and they especially want to thank their team members for all their hard work - walking, running and almost crawling. Helen and Jeannette said, 'Our teams were amazing! After a full day of walking they still managed to keep up morale and walk through the night with aching bones and weary limbs. Around the edge of the running track candle lit messages, written by families and friends to survivors and lost ones, were lighting the way. It was truly overwhelming and it felt wonderful to be a part of something so important and to be raising money for this critical research'.

We would like to thank everyone for their generosity.

If anyone would like to make a donation you can visit the team page HERE.